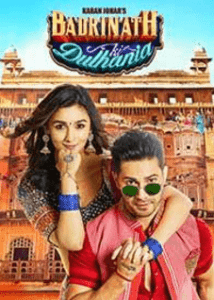 Badrinath Ki Dulhania Hindi Movie Starring Varun Dhawan as Badrinath Bansal and Alia Bhatt as Vaidehi Trivedi, the film is more than just your boy meets girl love story. It has the raw and refined with a touch of desi-pan and a hatke definition of pyaar! Join them in the journey of love, laughter, and lunacy called Badrinath Ki Dulhania.

In Badrinath Ki Dulhania which is a romantic comedy narrates the story of Badrinath (Varun Dhawan) who meets Vaidehi (Alia) and wishes to Marry her. But Vaidehi is not interested in Badrinath which is kind of routine Movie funda we see. But Badrinath does not want to give up on love so easily and tries to woo Vaidehi. Badrinath with his acts gets close to Vaidehi and gets her to accept his proposal. Vaidehi leave Badrinath alone in Wedding and leaves the city which upsets both Badrinath and his father who is egoisted Male doministic guy who believe nothing but dowry and pride in being a Man. Rest of story is how Badrinath chases Vaidehi and finds out that she is good girl with some abitions and he is not right match for her. But as always in the end they meet each other but how?

Decent comedy movie with some good comedy elements in the movie….Varun Dhawan as always charms in his role with Alia doing best as a girl next door with her cute looks and abitions…