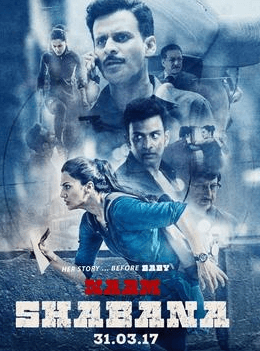 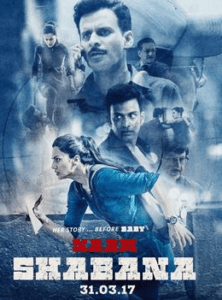 This Movie is Prequel to Baby movie. In Naam Shabana, Shabana(Taapsee) is inducted to RAW after when she encounters a road side incident with her boyfriend. She is been watched many years before this incident for making sure she is a good fit for RAW. This movie gives idea of RAW agency induction process and training process.

Naam Shabana is a Prequel to Baby movie release earlier. In this movie, Shabana (Taapsee Pannu) is shown from pre-induction days to Indian Raw where she is been watched for many years. She encounters a fight with 4 spoil brats when she is with her Boyfriend. One of these 4 hit Shabana’s boy friend from back and he dies in the hospital. Shabana keeps searching for Justice through the books but police just don’t respond to her request. From Raw agency Manoj Bajpai reaches out to Shabana and tells her that he can help with finding the 4 guys who were involved in the incident. Shabana when asked says she would kill the 4. The information from Manoj Bajpai is given her to Shabana after a small test where she helps a informant getting killed. She then sets out to kill the 4 with help of information and tickets of travel/hotel booking given to her from Raw. She decides to kill only 1 of them who is one who killed her boy friend becoz other 3 are just his Chamcha’s (just followers). She kills him successfully and then when in trouble is help with Akshay kumar in escaping. She is then inducted to RAW and trained.

Manoj deploys Shabana and Akshay to kill a terrorist who is escaping RAW for long time with some failed attempts.
Rest of story is how She kills the terrorist with help from Anupam kher who is the planner….

One time watchable movie. Good performance by Taapsee. Scripts gets a bit slow at moments in first half. Screenplay can be better. Not as exciting to watch as Baby movie but is a decent watch. Good to see Akshay again in Baby style Movie where he is tough RAW agent with only motive is to serve the country.