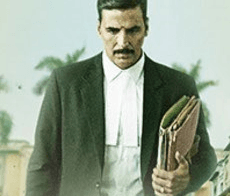 Synopsis:
Inspired by true events that has happened in India, this is sequel to the national award winning film Jolly LLB. This Movie Jolly LLB 2 is about a big case where he will fight against the corrupt and the powerful. As in Jolly LLB, Jolly LLB2 is fight for what is right. It will not be an easy one for Jolly again as he will realize he will be the last man standing up for justice.

Story:
Jagdishwar Mishra alias Jolly (Akshay Kumar) starts out as a Apprentice to a lawyer in Kanpur. He finds a pregnant widow named Hina Siddique (Sayani Gupta) who is looking for for justice. Hina gives Jolly LLB the case of her husband murder but then she realises he is a fraud. Hina she kills herself and leaves Jolly LLB with heavy guilt on his conscience. Rest of Story is how Jolly LLB gets justice for Hina and her husband in court.

Verdict: Superb performance by Akshay Kumar and Saurabh Shukla. Not a moment of boredom in whole movie. Executed perfectly. Akshay again has proved his acting skills are the best in Bollywood.