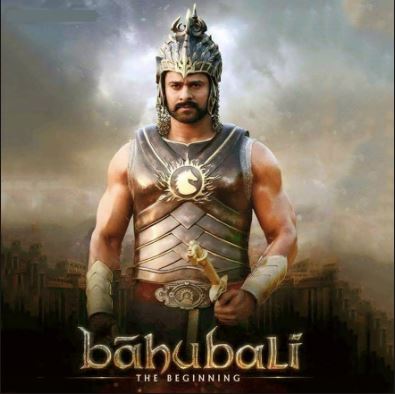 Baahubali is undoubtedly the most prestigious and expensive telugu movie that has released of Tollywood in the recent times. Directed by the Mr. S.S. Rajamouli, this film has Prabhas, Tamannah, Rana and Anushka in lead roles. It is complimented to be the biggest motion picture in India.

Shivudu(Prabhas) is brought up by some native villagers. He grows up with special skills which turn out to be a mystery for every one. One fine day, he spots Avantika’s(Tamanna) Mask and  endures on journey to find her and falls in love with her.

Upon following Avantika, shivudu comes to know that Avantika and her group are trying really hard to rescue the royal princes Devasena(Anushka) from the evil clutches of Bhalaladeva(Rana Daggubati). Shivudu decides to help Avanitka and enters the Mahishmati Kingdom.

He sets out to accomplish Avantika’s quest and rescue Devasena. He then comes to know that he has a past associated with Mahishmati Kingdom and he is son of great warrior Baahubali (Prabhas again). Then Baahubali Story is revealed which forms rest of the story with a twist/suspense at the end.

Baahubali can be classed as the by far the most technically brilliant film that has come out from Indian cinema.

The VFX work, graphics and sets are the best seen in Indian Cinema so far.

Music and background score are good.

Sabu Cyril has done a marvelous job with the sets. The sets of the kingdom surroundings or the warfare equipment etc.. looks very impressive.

On the whole, Genius director Rajamouli’s Baahubali is one film which every Indian movie lover can be extremely proud off. The visual effects/ VFX effects are the best. Prabhas’s stunning performance as Baahubali. This Film makes new milestone in taking Telugu cinema and takes it to the next level. If we ignore the predictable story line and keep an open mind , Baahubali will entertain you. Movie not to be missed…