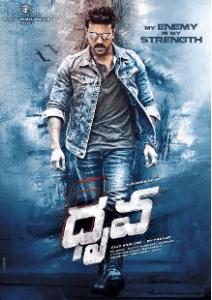 Movie Tagline: Friends define your character, whereas your enemy defines your capacity.

Dhruva(Ram Charan) plays sincere IPS officer role who wants to eradicate crime in the city of Hyderabad completely. Instead of catching the small time fishes/thieves, he decides to trace out that people how are above them and making these goons do what do. He believes in “Friends define your character, whereas your enemy defines your capacity”.He starts find the big goons/business people are doing the crime using these small thieves. He gets supprised to see that one man called Siddharth Abhimanyu (Aravind Swamy) is behind all these corporate crimes. Rest of the story is as to how Dhruva makes some clever plans and nabs the powerful Siddharth down.

Some Best performances in the movie. Good watch….