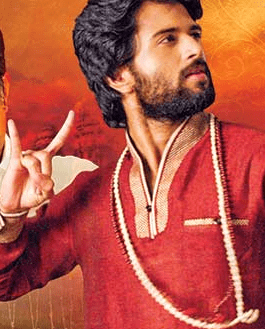 After Pelli choopulu, Vijay Deverakonda is back with another interesting movie which is eagerly waited for.
Dwaraka is a story of thief with Love story. It’s about a thief who turns into a god man / Baba and he falls in love with a girl which changes his life. It looks an entertaining and engaging film.

In Dwaraka Movie, Vijay Deverakonda plays a role of Srinivas who is a thief who cons people along with his two friends. On One day Vijay plans a robbery attempt which fails. While trying to escape, Vijay gets into an apartment complex named Dwaraka. A pujari(Saint) played by Prudhviraj convinces Vijay to be Swami Krishnanand for his own benefit.

And slowly Swami becomes famous for his problem/Wish solving abilities. Prudhvi along with Prabhakar & others set up a trust in the Swami’s name to get the donations.
Vijay as a Swami gets in touch with Vasudha(Pooja Jhaveri) with whom he is falls in love with.

Ramakrishna (Murali Sharma) who works for exposing fake Baba’s like Swami Krishnanand keeps his watch on Vijay.
Rest of story is all about how Vijay proves himself worthy Baba by serving people in need and gets his love..

Dwaraka is a Average watchable Movie which keeps you occupied. Has some Good comedy elements. Vijay Devarakonda performance is good and he can be appreciated for his unique role with different shades in itself. Movie does keep audience interested with the Swami and his opponents part. Some Good comedy and moments makes this a good one time watch.