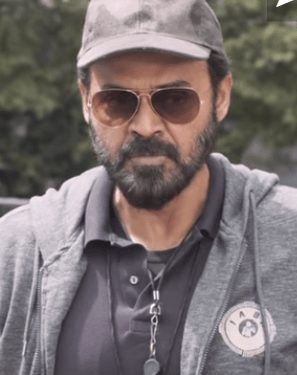 A professional boxer named Adi aspires to win a gold medal for India in an international boxing championship. But he falls prey to the politics in the boxing association and loses an important match to an undeserving opponent. Adi quits boxing only to return to the boxing ring as a coach to an aggressive fisher woman Rameshwari who he thinks/believes can win Gold medal for India. He tries to accomplishes his dream of winning the gold medal for the country through her.

In the Guru Movie Venkatesh plays Aditya who is an aggressive boxing coach who always has problems with the sports federation. After a fight with one of the heads in the Boxing association, Aditya is transferred to Vizag to train/coach young women boxers over there as punishment. Aditya heads to Vizag and he spots a local slum girl called Ramudu (Ritika Singh). He notices that she has a careless attitude and raw fighting spirit which he likes very much and he chooses her as his boxing candidate and starts training her. But the free spirit aimless Ramudu starts going against Aditya and his goal. The rest of the story is as to how Aditya trains and convinces Ramudu and makes her the Indian women’s boxing champion.

It is good Emotional Sports Drama. Venkatesh is in a unique role which he played very well. This Movie Guru is remake of Saala Kadoos which is Hindi movie which was played by Madhavan. Movie is done well as with Saala Kadoos which was the original. Liked the song Jingidi Jingidi and also looks good on screen. In Guru, dialogues are its asset and the way the film moves ahead with the background score songs is very good.