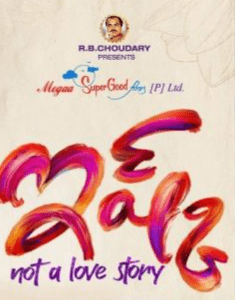 Ishq, also known as Ishq: Not A Love Story, is a romantic thriller film directed by S. S. Raju and released in India in 2021.  The film stars Sajja Teja and Priya Prakash Varrier in lead roles and is produced by Mega Super Good Films.  It’s a remake of the same-titled Malayalam film from 2019. The film’s music is being composed by Mahati Swara Sagar.  The film will be released on July 30, 2021.

The story follows the lives of a man named Siddhu (Teja Sajja) and his lover Anu (Priya Prakash Varrier). Siddhu is employed at an information technology firm and has taken time off to attend his sister’s wedding. He and his fiancée Anu go on a date while on leave, and they run into Madhav (Ravindra Vijay), who is riding in a car with another acquaintance. They both persuade Siddhu that they are police officers, and that if he and Anu do not accompany them, they will be detained. While travelling about with them, Siddhu and Anu are subjected to mental torment. While Siddhu is away, Madhav tries to make a move on Anu.

The film could have been so much more if the movie had been handled better rather than ending up as a case study on the huge, fat masculine ego.  The  storyline and narration is not too great while the lead actors’ acting skills are good.

All music is composed by Mahathi Swara Sagar.