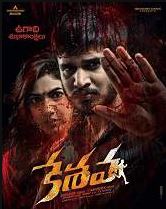 Keshava is a Crime/Action/Revenge backdrop movie and its story is based on a law college student called (Keshav) who is on a hunt down to kill all those who destroyed his family in a dreadful accident.

Keshava is a law college student who is on a hunt down to kill all those who destroyed his family in a dreadful accident on one night which killed his parents and made his sister handicapped. Keshava commits a series of murders and a special officer (Isha Koppikar) is appointed to deal with the case. How these murders are related and who is committing such murders of Police officers is investigated by Isha Koppikar. Keshava meets his childhood friend Satyabhama (Ritu Varma) in Law college but denies to know her to keep her away. She remembers him and follows him. She based on his absense and series on incidents feels like he is connected to these murders. When she forces, Keshava tells what happened on the night when whole of his family was met with accident and why he is doing these murders. Police gets a clue that he is hurt on back on his head in one of murder and on hunting for Keshava, they find and arrest him. Rest of the story is as to how Keshava continues on his revenge even when the cops keep an eye on him and completes his revenge with the help of Satyabhama.

Good Decent Crime/Action/Revenge backdrop movie. Twist in tale at the end when he reveals what happened that night makes audience connect.