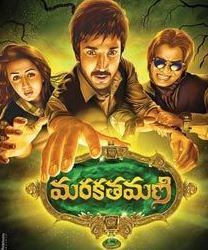 Horror comedy movie with Aadhi who did his best as a thief/smuggler.

A small time smuggler with his friend keeps doing small consignments. One day he hears of a big consignment task where the task is to steal Markathamani. He accepts without knowing consequences and meets a Baba (kota sreenivas roa) who explains everyone who touches the Markathamani dies and he is been already chased by Ghosts. He is then given a chance to bring back someone who is dead to help him and they choose the uncle of his friend who is died after touching the stone. Rest of story is how the uncle ghost awakens another 3 ghosts with comedy angle and gets to Markathamani at last…