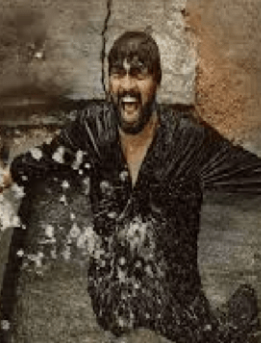 Surya Prakash is a trustworthy software developer who lives with his parents. His sole goal is to realise his parents’ ambitions, which they sacrificed for his upbringing. Surya is soon engaged to Meenakshi. Meanwhile, tensions in the state have risen following the death of Rajagopal, an honest and sincere lawyer, and the police are under pressure to apprehend the murderer. CI is the case’s in-charge. Surya gets arrested after Kishore accuses him of killing Rajagopal after receiving a contract worth 10 lakhs INR, which Surya actually borrowed to buy a house. Surya is taken aback when Kishore fabricates proof, and everyone who can show Surya’s innocence turns hostile.

Surya is imprisoned pending trial, and Kishore tortures him to make him confess responsibility, but Surya refuses. Surya’s parents commit suicide by setting themselves on fire, and the world around them is devastated. Kishore confesses to Surya on the funeral ground that he murdered his parents. Surya becomes enraged and assaults Kishore, resulting in another lawsuit being filed against him.

Surya’s case is still in court after four years, and he continues to be tormented. He meets and tells the story of Radha Prakash, a controversial Youtube celebrity. Later, Advocate Aadhya steps up and is successful in freeing Surya out, but Surya thrashes several imprisoned goons, who beat him up for no reason, as per Kishore’s plot.Surya is once again imprisoned. Radha Prakash is revealed to be Aadhya’s brother, and he witnessed the mistreatment of Surya by the thugs. Surya’s case is sent to Fast Track High Court with Aadhya as his defence lawyer after the video is released to the Internet and the Human Rights Officer meets him in jail. Surya is found not guilty by Aadhya, and he is cleared of the charges. Rajagopal’s daughter Aadhya is unveiled. Surya resolves to use IPC Section 211 to exact vengeance on Kishore. Satyamurthy is hired as Kishore’s lawyer. Surya kidnaps Kishore’s assistant Chandraiah, who testified against Surya in Rajagopal’s murder trial. Kishore bribed two goons to kill Rajagopal, but under pressure from the opposing party, he captures them, according to Chandraiah.

The thugs discovered the truth and fled, prompting Kishore to enlist Surya’s help by citing a coincidence as evidence. Chandraiah agrees to testify in court, but he is kidnapped by the men of Naagender, the ex-Home Minister who is revealed to be the mastermind behind Rajagopal’s murder. Aadhya pleads that the Judge grant them some time, which he does. Kishore assassinates Chandraiah by fabricating a narrative claiming he perished in riots.

Aadhya and Surya learn that Naagender gave Kishore the order to kill Rajagopal. Naagender’s land scandals were brought to the knowledge of the government before Rajagopal’s death (five years ago), and to deflect the media’s attention, Naagender had Rajagopal slain because of his popularity and excellent image among the people.Aadhya and Surya are close to exposing Naagender and ask for permission to listen in on his phone calls in order to prove his guilt. Surya is kidnapped the night before the court, and Naagender blackmails Aadhya into dropping the case, but Surya inspires Aadhya to continue. Surya, despite his injuries, manages to free himself and make his way to the court, where he is admitted to the hospital and spared from death. Naagender and Kishore are found guilty and sentenced to death for the rest of their lives. Surya is pleased with himself for avenging his parents’ deaths.

Naresh does very good job in the movie and he is at his best and prove himself as a serious actor rather than just a comedy actor.