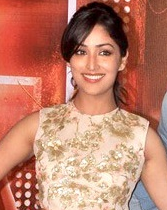 Yami Gautam Dhar (born 28 November 1988) is an Indian actress who primarily appears in Hindi films, with a few Telugu and Tamil films thrown in for good measure. She rose to prominence after appearing in several Fair & Lovely commercials. She later appeared on television in Chand Ke Paar Chalo (2008–2009) and Yeh Pyar Na Hoga Kam (2009–2010). She went on to appear in a number of South Indian films after that.

Gautam made her Hindi film debut in 2012 with the critically and commercially successful comedy Vicky Donor.

She received praise and a nomination for a Filmfare Award for Best Female Debut for her performance. She later appeared in films such as Badlapu.