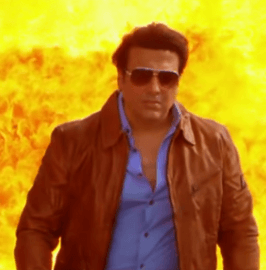 Govinda is playing the role of a policeman in this Action movie Aa Gaya Hero after some Gap.

In Aa Gaya Hero movie Govinda plays a cop named Ravindra. He is brought in for controlling the law and order situation in a city. But to put an end to crime in the city he has to bring out the actor within himself.