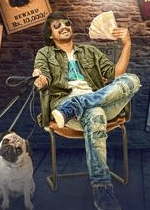 Kittu Unnadu Jagratha is a Telugu Action Movie written and directed by Krishna Vamsi. It Stars Raj Tarun, Anu Emmanuel and Arbaaz Khan in the lead roles. Another highlight for the movie is that the music is by Anup Rubens.

In this movie Kittu (Raj Tharun) is a young car mechanic who falls in love with Janaki(Anu Emanuel). Due to some problems in his love story, he turns into a dog kidnapper and demands money out of it.
When Janaki comes to know about Kittu’s kidnap business she breaks up with him. When AR(Arbaaz Khan) who is professional goon kidnaps Janaki. Kittu plans to rescue Janakai which forms the rest of the story….

Kittu Unnadu Jagartha is a Good Comedy entertainer which some good comedy elements. Movie’s story line is weak and misses logic with slow first half is its drawbacks. People who like some comedy for weekend with not too much expections can definetely give this a one time watch…..