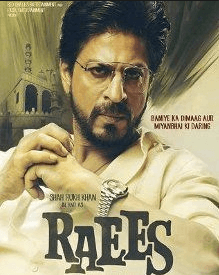 Raees Alam(Shah Rukh Khan) runs an illegal alcohol business in a Gujarat during prohibition. ACP Majmudar wants to bring down Raees of from high position.

In Fatehpur in Gujarat, Raees Alam (Shah Rukh Khan) who at a very early stage in life is inspired by his mother, who quotes, “Koi dhanda chota ya bada nahin hota hai, aur koi dharam dhanda se badkar nahin hai.” which means, “no occupation is small nor big and no religion is bigger than one’s business.”

Raees lives and does his business in the world on his own terms. He starts by working for Jairaj Seth (Atul Kulkarni) who indulges in branded liquor. Raees gradually grows into a big guy and how ACP Majmudar wants to bring down Raees of from high position forms the rest of the story.

Shah Rukh Khan looking great with full of Action. It is a Good Watch. Filmed like films of the early 1980’s. It has thrilling action scenes, drama and some romance.