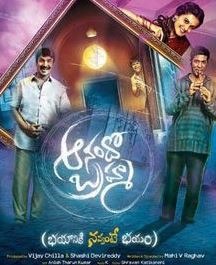 Tapsee who is making waves in Bollywood has returned to Tollywood to act in a horror comedy “Anando Brahma”. She is known to pick the right subjects and the film has generated good hype. The trailer has also upped the expectations.

Deepa, Taapsee, Vijayachander and Raghu are ghosts staying in their ancestral house. They are shown to be waiting for the wife of Vijayachander to come home. They don’t know how they were killed. A family visits their house for tenancy but they scare the family away. The broker who deals with the house is also scared as he spots the ghost of Taapsee and informs the house owner Ramu (Rajiv Kanakala), an NRI and his cop friend Vamshi (Raja Ravindra). Vamshi is apprehensive while Ramu dismisses it as a concoction while in real, Vamshi connives with Yadagiri to force Ramu to sell his house at a throwaway price by fabricating and peddling the ghost story. Sidhu (Funny Srinivasa Reddy) overhears their conversation and makes a deal with Ramu that he would be sending his three friends to stay one night at the house and if they survived, Ramu would pay some part of the sale price to Sidhu as commission. But his three friends encounter ghosts that night. One of them is locked in bathroom, his friend (Jeeva) is knocked unconscious and another is scared away. Ramu is convinced that there are ghosts and is about to sell it at the price demanded by Yadagiri. But Ramu after being urged by Sidhu, gives him one last chance to prove that the house is not haunted. Sidhu and his friend Tulasi (Thagubothu Ramesh) meet Babu (Funny Shakalaka Shankar) and Raju (Funny Vennela Kishore) coincidentally and all are in desperate need of money. Sidhu has to take care of his amnesiac mother and needs to have a heart surgery to overcome the problem of hole in his heart. Babu, who is so infatuated by movies that he starts enacting the role he watches, is duped by Bharani who posed himself as an agent of famous cinema producers in Tollywood. Tulasi, a drunkard who drinks only after the clock ticks 9 in the night, in an inebriated state bets on a cricket match and loses his money that he saved for his son’s surgery. Raju is deaf and nightblind who often uses his flute when frightened. He is embroiled in a robbery case after an ATM he was guarding was looted and he was caught napping in CCTV. The security agency that hired him tells him to repay the money lost to prevent the agency from getting banned.

As they start staying in the house, all the ghosts decide to scare them away. However, all the four friends manage to stay not scared due to their peculiar habits, and instead start intimidating the ghosts. After the first day, Ramu inquires Sidhu about the presence of ghosts and decides to give him two more days to finally sell the house. Vamshi does not like Sidhu and his group staying inside the house and sends fake ghosts to scare them away. However, the fake ghosts are frightened away by the real ghosts. On the second night too, Sidhu and his group too manage to stay calm and manage to scare the ghosts. However, on the third night, the ghosts frighten the group and are about to kill them when Sidhu’s mother comes to the house looking for him. She is none other than Vijayachanders wife and in a flashback, reveals that Ramu is their son. Taapsee and Deepa have been adopted by the couple. Ramu incurs loss in a business and to cover for the losses, he intends to sell the house. Vijayachander refuses to sell the house which infuriates Ramu and kills all of the family members except his mother. The ghosts realize the reasons for their death and enact their revenge by killing Ramu. Sidhu and group while leaving the house find cash-laden bag in the car of Ramu and take them away. They convert that house into old age home and lived happily with Taapsee’s mother and some other old members who are abandoned by their children.