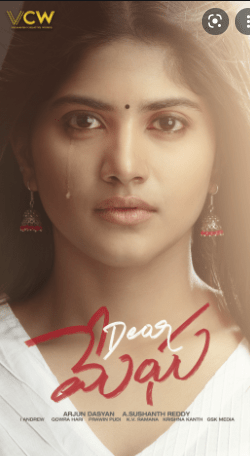 Megha Swaroop (Megha Akash) has affections for her college classmate Arjun (Arjun Somayajulu), but she is unable to express them. When Arjun leaves for a different nation, the introverted girl becomes depressed.

They meet again three years later in Mumbai, and this time Arjun declares his love for her. They start their romantic relationship. Arjun vanishes from her life once more due to an occurrence.

Adi (Adith Arun) appears out of nowhere in her life. Will Adi stay with her indefinitely or, like Arjun, vanish? What will happen?

Megha Akash’s portrayal of the title character is outstanding. In this film, she is stunning.
Pavitra Lokesh is another actor that captivates audiences with her outstanding performance.

Another Kannada film that has been making waves recently is “Dia”. “Dia,” which was released last year, was praised for its sympathetic portrayal of love and the struggles of an introverted girl. The tragic finish of the narrative made it all the more attractive for romance enthusiasts.

As soon as these films are remade in other languages, the enchantment disappears. It’s hard to recreate the same feeling. The Telugu version of “Dia”, “Dear Megha”, is the latest example.
Director Santhosh Reddy has accurately kept the original’s structure and spirit, and the lead actors have given good performances. Nevertheless, it fails to realise its goals. While the film has a short two-hour runtime, it’s packed with heart.

Arun Adith’s entrance gives the film a boost, although it’s short-lived. There is no huge jest in the song save for “Aamani Unte”.

The film is a faithful replica of the Kannada film yet it’s not really fascinating. The slow-paced drama has its moments, but they aren’t enough to keep the audience interested in what’s happening on screen.

Weak Remake, in the end

The first single “Aamani Unte” was released on 16 July 2021 by Pooja Hegde.

All lyrics are written by Krishna Kanth; all music is composed by Gowra Hari.