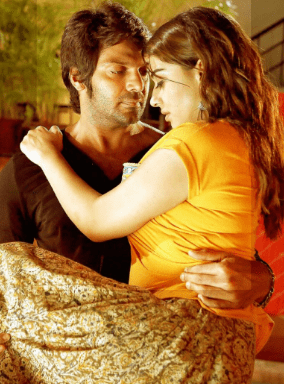 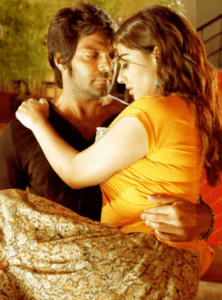 A young drug cartel employee named Siva in this tamil movie dubbed to telugu Meaghamann. Movie starts with Siva missing even the outermost circle of the target board in front of him. The bullet makes the mark on the surrounding wooden board instead. Later, Siva is shown to be having an affair with a cop’s wife. Someone from drug cartel trails him and sees him loitering outside the cop’s house to verify. He plays a underground Cop and soon he is shown where Siva aims his gun at the same target board and pumps bullets through the very hole that his earlier bullet made. And then he also repeats the action with his left hand.

Siva’s neighbor is Usha (Hansika Motwani) who thinks he is a software engineer. She slowly falls for Siva and keeps imagining things of Siva.
Rest of the movie is how Siva tries to bring down drug cartel but he is found out as cop by goons. Later is how he uses his skills to clear everyone off completely.

Good action movie.. definitely a one time watchable action flick. Arya does a awesome job a underground Cop who is dedicated to his job.