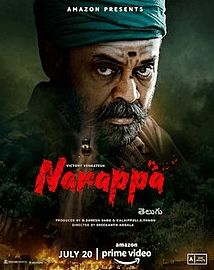 The film’s music was composed by Mani Sharma, and the cinematography and editing were handled by Shyam K. Naidu and Marthand K. Venkatesh, respectively. The film’s principal photography began in January 2020.

The film is good movie with village politics and caste politics.  Even though its a remake of tamil movie( Narappa is a faithful remake of Dhanush’s Asuran) it has many merits  like one of its major is venkatesh acting so naturally throughout.

Mani Sharma is partnering with Srikanth for the second time, this time as the composer of the soundtrack album, after scoring the film Seethamma Vakitlo Sirimalle Chettu (2013). Suresh Productions Music released the first song “Chalaaki Chinnammi” on July 11, 2021.  On July 16, 2021, the second single, “Ooo Narappa,” was released, July 23, 2021, the third single, “Rage of Narappa,” was released and on July 30, 2021, the soundtrack CD (jukebox) was released. Mani Sharma composed Ooo Narappa and Chalaaki Chinnammi, with the remaining songs and background score by G. V. Prakash Kumar from Asuran but uncredited.