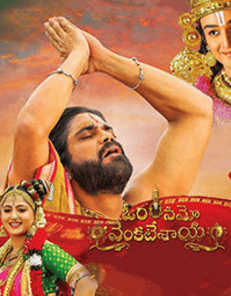 Om Namo Venkatesaya is a 2017 Indian Telugu Movie based on the life of Hathiram Bhavaji. The teaser of the film was released on 24 December 2016.

Om Namo Venkatesaya is a 2017 Indian Telugu Movie based on the life of Hathiram Bhavaji. Nagarjuna played role of Ram who from his childhood desires to make contact with the eternal powers of the god. Ram joins the Padmananda Swamy(Sai Kumar) Ashram in Tirumala. Ram devotes and learns about Lord Venkateswara Swamy. One day, Lord Venkateswara Swamy answers his prayers and appears before him to acknowledge his sincerity.

Rest of story is about cunning people who give trouble to Ram and how he meets Krishnamma(Anuska) and Pragya Jaiswal in this beautiful Devotional Movie.